This drama is technically kinda old as it aired back in 2015, but here I am rewatching it for giggles and I decided to write a review – ’cause Why Not?

Set at the elite Sevit High School in Seoul, the drama follows the lives of five students as they attempt to survive in a vicious environment where academic elitism takes place. Kang Yeon-doo (Jung Eun-ji) is the leader of outcast street dance club “Real King”, a group of students who band together because of their poor academic performance, whereas Kim Yeol (Lee Won-keun) is the President of “Baek Ho”, an elite club composed of students from the top 5 percent. When the two clubs are forcibly merged to create a cheerleading squad, the two put their differences aside for the benefit of their clubs. As they go on with their misadventures, many things happen that result in a strong and unbreakable bond. Cheer Up!is a story that aims at ordinary high school students’ misadventures including love, heartbreak, pain and friendship.

‘Sassy Go Go’ is just 12 episodes and had fairly low ratings. To be honest, I wonder why I liked the drama enough to actually stick through it despite the low ratings — but seriously, this drama is still better than ‘Moorim‘ which I totally gave up on. It has enough cuteness and motivating quirks to keep anyone going. It was probably targeted towards a student audience, but flopped because students would find the drama tacky in a way and because they’re too busy studying (haha like the students jn the drama), but it could be worth your time — I even speed-rewatched it just for this review

I really like Jung Eunji not because she’s an extra phenomenal actress or something (I still think her talent as a singer overshadows any of her other pursuits because it’s so immense), but I usually really like her portrayals of the roles she plays. She’s convincing because she’s willing to be convincing — she doesn’t focus on staying “pretty pretty” and delicate as some other idol-actors. Also, her smile is extra bright, but when she has to shed tears, she does it properly enough. This drama is also one of the first times I have been exposed to Lee Won Keun and Jisoo. Lee Won Keun is indeed one of those flower boys, but he’s somewhat different from, say, Song Joongki or Jang Keun Suk or Cha Eun Woo – if you see what I mean. He doesn’t really do too much of the cringy flower boy stuff, I would say, in this drama, so y’all are relatively safe – or at least your fingers are and will stay straight. Jisoo is playing a second lead syndrome … so be prepared to feel real bad for him. 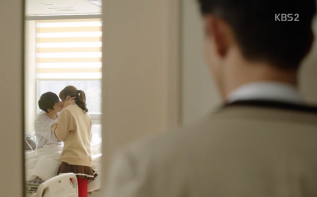 This drama is for the immature. Not in the sense that it’s supposed to provoke laughter in the way ‘Family Guy’ or ‘South Park’ does (talk about immatureeeee), but it let’s you feel a bit more youthful as you watch these kids grow up and learn to not only cheer each other on, but also themselves.

As cringy as the background is, this drama is centered around the underdogs and the top 5% at an elite high school. The underdogs have the lowest ranks in terms of grades, but rank highest in terms of happiness as they actually behave their age — enjoying life and having fun as the teens they are. On the other hand, we have the top 5%, who seem set for life, but actually they each lead unhappy lives — be it pressure from a Tiger Mom who will stop at no cost to build up specs worth of admission into an Ivy League or domestic abuse. The principal of the high school breaks the wall between the top and bottom of the food chain at Sevit when she decides that she wants to annihilate the underdogs’ Real King street dance team. Desperate to protect the club her graduated sunbaes entrusted her, Kang Yeon Do (Jung Eunji), rebels against the principal. However, at the same time, the principal seeking to ingratiate Kwon Soo Ah’s filthy rich mother agrees to create a special cheerleading team designed to boost Soo Ah’s extracurriculars section on her resume. For this plan to get Soo Ah into an Ivy League, the cheer leading team must not only include Baek Ho members (the top 5% Soo Ah is part of), but also the Real King members as nerds can’t dance. Duh. Besides, who else is more qualified as a pawn than the Real King members who would do anything to get their club back? The principal’s threats don’t end there, as the top student at Sevit, Kim Yeol (Lee Wonkeun), doesn’t want to be used as a pawn in Soo Ah’s Ivy League game. However, to protect his best friend, Seo Ha Joon (Jisoo)’s secret, he agrees to join and persuade the stubborn Kang Yeon Do. Yeon Do, being the loyal girl she is, would have agreed to do this cheerleading stuff, but whaddaya know — Kwon Soo Ah finally reveals her two-faced self and betrays her friend Yeon Do and the resulting scandal was the trigger that enabled the principal to get finally rid of Real King. Yeon Do is aware that Soo Ah and the principal are just using her, so her last bit of dignity just won’t let her cave in and agree to the cheerleading.

When Kim Yeol is forced to join the cheerleading gig, he gives it his all to persuade the entrenched Yeon Do. He finally manages to convince her when he reveals that the principal has been kicking the Real King members out of the dorms and his reason for agreeing to the cheerleading gig.

The top 5% and the underdogs start out as oil and water, but over time, through strenuous workouts, trials, and many accidents, the two come together and forge a long lasting friendship. The Baekho members learn to have fun as a teenager should and enjoy the littlest things in life as they set down their arrogance. The underdogs learn to forget and forgive, as they realize that friendship is strongest when the words left unsaid are heard loud and clear.

This drama constantly emphasized the disjunct worlds of adults and kids. Within the school, the principal was only concerned with the reputation of the school and polishing the records. The teachers, boot-licking lackey and unwanted-contract-about-to-end loyal teacher alike, keep their mouths shut and turn a blind eye to protect their jobs. Parents, as most clearly demonstrated by the Baekho mommies, care about grades and the paved out futures they’ve crafted more than their children’s happiness. With separate bubbles, the youth in the drama have no one to turn to when they are the most helpless.

This is most evident in Kwon Soo Ah. Despite really disliking her and knowing that her mother isn’t completely (99%, but not 100%) responsible for her despicable debauchery, we are constantly reminded in every episode that she does have some guilt in her and she’s really suffering. From purging to smoking, the No. 2 student does not have it easy. With the constant pressure from her mother, she becomes more and more twisted throughout the drama — to the point where she loses herself. However, with the Cheery Team (I’m just gonna call the merged Baekho and Real King baes this) and their new understanding of friendship, they are not only willing to forgive, but also embrace.

I really like the positivity in this drama, as sometimes you just need the cringey immature kind of reminders to be happy. This drama does not require you to think, but to just sit back as leisurely as you can and receive the messages at face value. As a bonus, eye candy cutesy couple; Kim Yeol X Kang Yeon Doo! This drama may be childish, but 12 episodes should not be that long of a break from the adult world 🙂 3.9/5

fill the balloon up Cancel reply

The Balloon dat Flew Away

Look at All These Technicalities